A NodeMCU dev board/ESP8266 runs Arduino code, pushing data over the wifi to [ThingSpeak], which subsequently tweets for us. The number selected on the knob and the estimated time of closing is stored on Thingspeak (web people, ask Aidan for an API key if you want it.) 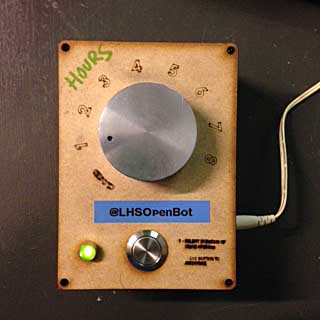 The larval form of OpenBot with disgraceful MDF box.
Retrieved from ‘https://wiki.leedshackspace.org.uk/w/index.php?title=Projects/OpenBot&oldid=1066’
Category: